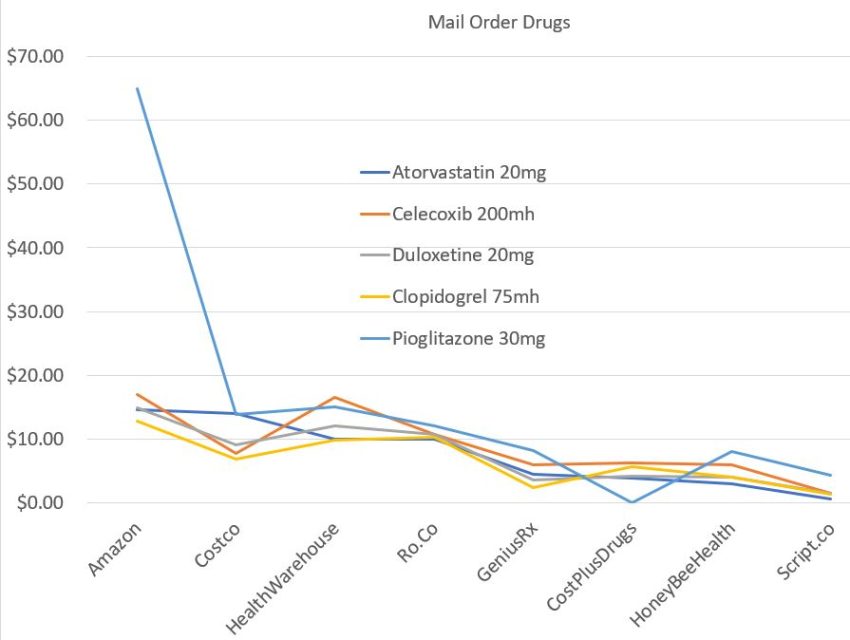 Nearly two-thirds of adults (62%) take at least one prescription drug. Of Americans on a drug, nearly one-third (30%) report either not filling a prescription or not taking it as directed due to the cost. Even people with prescription drug coverage often find drug copays are costly. According to Kaiser Family Foundation, the average copay for a generic drug is only $12 but many copays are much higher.

Over the years I have written about ways consumers can lower their prescription drug spending. This was my first installment, although I have updated it several times over the years. One of the many ways to lower drug spending is to use a mail order pharmacy. Indeed, many health plans require enrollees with chronic illnesses to receive their maintenance medications by mail. The reason is because plans get drugs at lower cost than if they had to reimburse local pharmacies. It is also usually cheaper for the enrollee too. In years past I sometimes heard people complain about mandatory mail order prescriptions because mail was not how they want to receive their drugs. Rather, they preferred to swing by a local pharmacy and wait in line. This may sound odd but a lot of seniors turn their monthly visit to the pharmacy into a ritual.

During the Covid pandemic, however, Americans began to embrace online shopping with purchases delivered to their doorsteps. Millions of Americans are now accustomed to the convenience of grocery delivery or curbside pickup. During the pandemic telemedicine took off. My dog has even had Zoom exams. Americans also began to realize that in-person pharmacy visits can be not only inconvenient but potentially put them in contact with people who may be contagious.

The prices at these pharmacies were generally very low; less than the average copay for those with insurance coverage in many instances. Some health plans require pharmacies that accept their insurance to charge a copay even if the cash price is lower than the copay. To keep prices low, six of the eight pharmacies do not accept insurance. Pharmacies that do not participate in insurance networks are not constrained by health plan rules and do not have the overhead of billing insurers. Three of the eight (Costco, Amazon and ScriptCo) charge a membership fee ranging from $60 at Costco to $140 per year at ScriptCo ($200 per year if paid quarterly). Costco and Amazon tended to have prices in the higher range of the eight pharmacies, while ScriptCo’s drug prices for the medications sampled ranged from $0.54 to $4.33. CostPlusDrugs.com, GeniusRx.com and HoneyBeeHealth all tended to have low prices without a membership. Which program works best for any given consumer would depend on the number of drugs they are on (see the figure).

There are many occasions when mail order is not ideal. Prescriptions that patients need only periodically or those needed immediately are more easily picked up locally. Consumers who lack insurance coverage can inadvertently fall into the trap when a drug’s so-called “cash price” is an order of magnitude more expensive than the insurance price. I often use a GoodRx pharmacy discount card. My wife received a text from Kroger pharmacy alerting her that her prescription was ready. The estimated price was $2,934.99. I knew there was no way that could be right. When I stopped by to inquire the pharmacy tech said that was the cash price. He had not run the price through insurance yet. When I asked him to try the GoodRx number on file our price dropped to $87.31. Seriously? Why would the cash price be about 10 times higher than the typical price negotiated for health plans? It is hard to say with any certainty other than some people may actually pay the outrageous cash price. Another time I went to CVS to pick up my dog’s medication and the pharmacy technician told me CVS has a special program for pets. My cost would be about $54. I pulled out a GoodRx coupon and it brought my price down to between $10 and $15 dollars. That was about a 75% discount off the special pet meds price.

When shopping locally GoodRx prices can vary tremendously from one pharmacy to another, therefore it pays to compare prices at different pharmacies. For example, Atorvastatin (generic Lipitor) ranges in price on GoodRx from $3.16 at HEB to $30.76 at Target. Celecoxib ranges in price from $3.25 at Albertson’s and Tom Thumb to $56.05 at CVS. Duloxetine (generic Cymbalta) is similar: $2.35 at Albertson’s and Tom Thumb yet $56.19 at Walgreens.