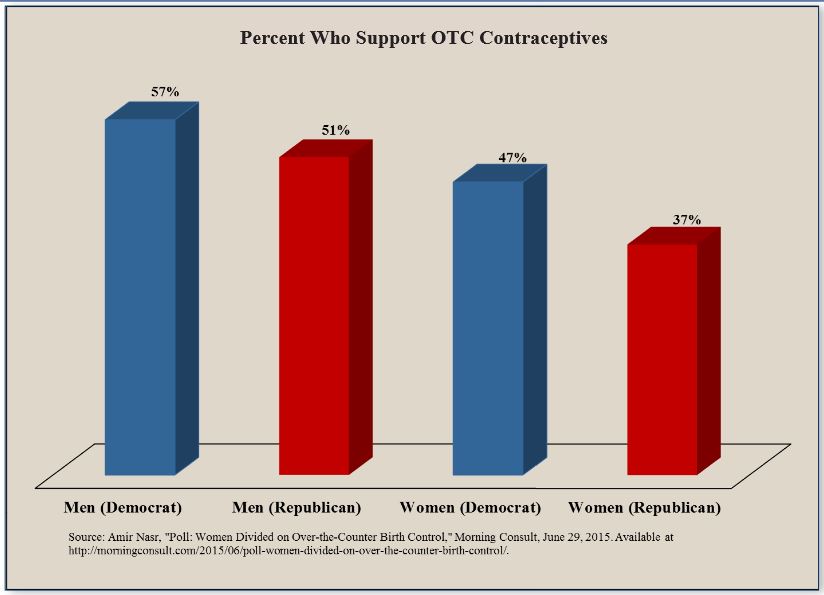 According to the New York Times the US Food and Drug Administration has received an application by a drug company to switch a prescription birth control pill to over-the-counter status. A Paris-based company, HRA Pharma asked the FDA to make its pill legal to sell without a prescription. That move is controversial, not just because of the recent Supreme Court ruling on Roe v Wade. Another pill manufacturer, Cadence Health, is also preparing to submit an application to switch its pill to OTC as well.

I wrote about the idea in 2015. In 2015 Senators Kelly Ayotte (R-N.H.) and Cory Gardner (R-Colo.) cosponsored Senate bill 1438, the Allowing Greater Access to Safe and Effective Contraception Act, to encourage and facilitate the sale of hormonal contraceptives without a prescription. This poll is a few years old, however.

One would expect women to be the biggest supporters; but, oddly, men tend to favor the idea more than women. A majority of men support the proposal (both Democrats and Republicans); yet just under half of female Democrats and just over one-third of Republican women support the proposal. [See the figure.] However, ignoring political preferences, most people view it as a good idea. Indeed, a poll by Reason magazine found seven-in-10 of those surveyed believed it should be legal to purchase birth control pills and patches without a prescription.

Yet, as soon as Senate bill 1438 was announced, (then) Sen. Ayotte and Sen. Gardner were attacked. Even Planned Parenthood was critical, saying “This bill is a sham and an insult to women” because “It would give women fewer birth control options and force women to pay twice for their birth control.”

Come again? At issue was the fact that OTC medications are not generally covered by insurance. Of course, patients can ask their doctor to prescribe an OTC drug and that usually is enough to get it covered. Indeed, Democrats are still concerned about insurance coverage for an OTC birth control pill. More than 100 Democrats have signed onto a bill that would require insurers to cover the cost of birth control if it is switched to over the counter status.

This is misguided. In my 2015 report, I explained how the price of drugs fall tremendously once they are switched to over the counter. The following was my conclusion back in 2015.

In fact, the reason OTC drugs fall in price is due to competition among vendors and a lack of insurance coverage. Requiring health plans to pay for OTC birth control would likely have the opposite effect on the price of OTC pills.