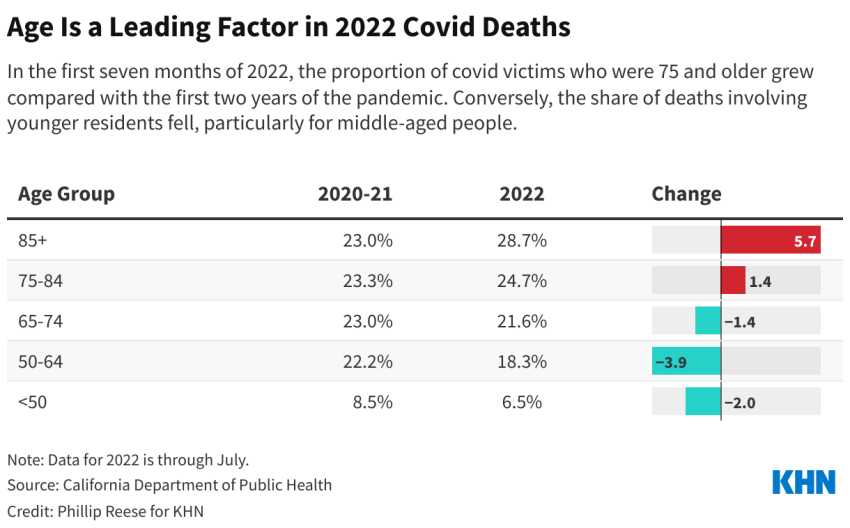 People are still dying from Covid although who is dying and how many has changed as we enter the third year of the pandemic. Covid has always been a killer of elderly people, but it’s also taken a heavy toll on younger people who were considered essential workers and could not shelter in place. This is data from California:

From April 2020 through December 2021, Covid killed an average of 3,600 people a month, making it the third-leading cause of death in the state cumulatively for that time period, behind heart disease and cancer. From December 2020 through February 2021, it briefly overtook heart disease as the leading cause of death, taking the lives of more than 38,300 Californians in just three months. During its most recent peak, in January 2022, Covid took about 5,900 lives.

Despite the plunge in deaths Covid is still killing hundreds of Californians every week.

In the first seven months of the year, about 13,500 California residents died of Covid, according to preliminary death certificate data from the state Department of Public Health. By comparison, the virus killed about 31,400 people in 2020 and almost 44,000 in 2021.

The biggest change is in the demographics of those who succumb to Covid. From 2020 to 2021 nearly half of those who died were Latino (46.9%). By 2022 the ratio of Latinos dying had fallen to slightly more than one-third (34.3). While death rates for Latinos fell, death rates for white residents climbed.

While death rates for people under age 65 have fallen, the death rates for those 85 and above now make up a higher proportion of deaths than earlier in the pandemic. [See Figure.] Officials speculate that many seniors got their vaccinations early on and have not followed up.

This is data from California and it would be interesting to compared it to other states. I suspect the patterns are similar.

2 thoughts on “The Changing Demographics of Covid Deaths”