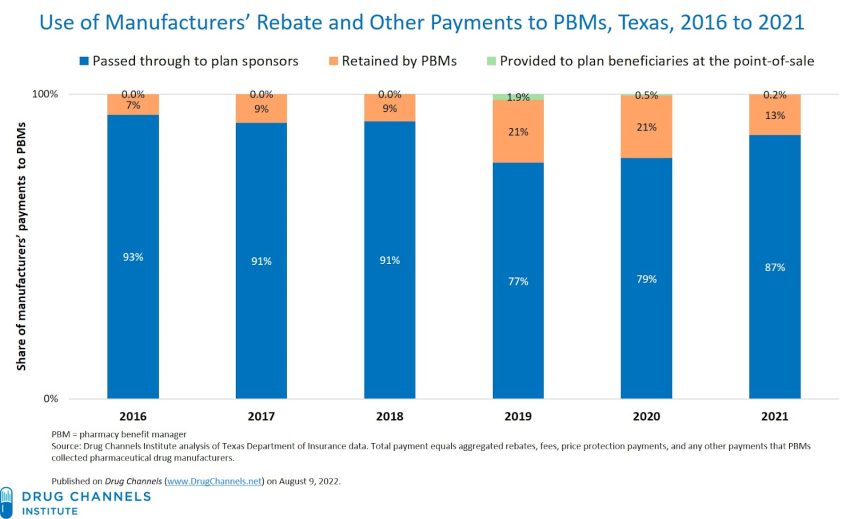 Pharmacy Benefit Managers (PBMs) have been in the news lately. PBMs manage drug benefits for insurers, self-insured employer health plans, Medicare Advantage plans and Medicare Part D. Recently executives from the three largest PBMs were hauled before Congress to discuss their business models. One reason for scrutiny is that the three largest PBMs control about 80% of the market.

PBMs also have their defenders. This from the Wall Street Journal:

Plan sponsors work with PBMs, despite having no obligation to do so, because they can reduce a plan’s drug costs by half. These savings translate to lower health-insurance premiums and better drug utilization.

A major issue is whether PBMs cause the price of drugs to rise as opposed to their stated goal of lowering drug costs for consumers and plan sponsors. PBMs have been accused in recent years of favoring larger rebates rather than negotiating lower prices. By agreeing to larger rebates drug makers could, in theory, raise prices in order to provide larger rebates.

Adam Fein of Drug Channels Institute examined data from a Texas law that requires PBMs to disclose how much they take in in rebates and how much they pass on to plan sponsors or use to lower consumers drug bills. This from Dr. Fein:

Our analyses of new Texas-mandated PBM disclosures reveal that plan sponsors receive most of the rebates, fees, and other payments from manufacturers. However, PBMs retain an unexpectedly large share of these payments—while the patients whose prescriptions generated these funds get almost nothing.

In other words, plans spread around manufacturers’ rebates and fees to offset premiums for all beneficiaries, rather than lower out-of-pocket costs for drugs that plans buy at a discounted price. Perhaps Congress will someday get around to corralling these funds.

The data shows rebates are not pocketed by PBMs. Rather, rebates largely pass through to the health plan who uses them to make premiums lower for all enrollees.

Drug plan design is a function of the goals of plan sponsors (health plans) and to some degree the market power of the PBM. In my opinion drug plan design is often used as a rationing mechanism by health plans. Healthy people shop for health plans based on premiums. Sick people shop for health plans based on benefits. Being unable to underwrite for risk, health plans use higher deductibles, higher copays and higher coinsurance to penalize those with chronic conditions. It would make little sense for a health plan to compete for enrollees by offering the cheapest drugs for patients whose conditions are likely to make them unprofitable customers.