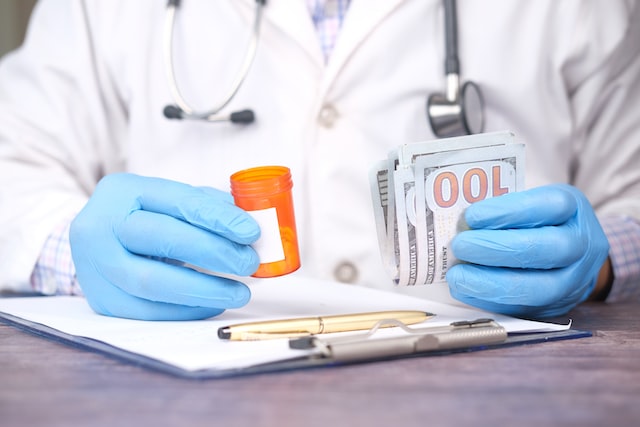 Over the years I have talked to people who faced medical bills for care they needed but could not pay. In a couple cases I told them about CareCredit, the largest medical care lender. For example, the lady who owns the salon where my wife used to go needed eye surgery. She was happy to learn there was an easy way to make payments for surgery. Our dog’s veterinarian and the equine vet that cares for my wife’s horse both take CareCredit. I’ve even met a plastic surgeon who accepts CareCredit. If your budget can’t take an $8,000 hit for a facelift you can finance it over time putting down a couple thousand dollars and maybe pay $200 a months for several years with interest.

However, there is a more ominous side to health care finance companies. The examples I’ve run across allowed a large vet bill or an eye surgery costing only a few thousand dollars to be easily financed like putting an unexpected car repair a credit card. Increasingly, hospitals are putting patients who run up medical bills on payment plans that are financed and serviced by health care finance companies who charge high interest rates.

According to an article in NPR:

“Hospitals have found yet another way to monetize our illnesses and our need for medical help,” said Milcowitz, a graphic designer. She was charged 11.5% interest — almost three times what she paid for a separate bank loan. “It’s immoral,” she said.

MedCredit’s loans to Allina patients come with 8% interest. Patients enrolled in a CareCredit card from Synchrony, the nation’s leading medical lender, face a nearly 27% interest rate if they fail to pay off their loan during a zero-interest promotional period. The high rate hits about 1 in 5 borrowers, according to the company.

Not long ago hospitals would negotiate with patients, figuring out what they can reasonable pay. Sometimes a hospital would accept a lower amount if the patient was diligent about making payments. Payment plans were usually interest-free.

It is also not uncommon for hospitals to sell their medical debt for pennies on the dollar. Patients could sometimes negotiate with the collections agency to pay a lesser amount, although that ran the risk of a collections agent lying, making a deal they did not plan to honor just to get some money in the door.

RIP Medical Debt is a charity who mission is to buy medical debt and cancel it for the benefit of indebted patients. In 2021 it worked with a hospital chain to purchase and wipe out debts that most patients were in no position to pay.

The agreement will affect roughly 82,000 people who had previously received services from the 21-hospital community health system. The provider noted that nearly all of these individuals met the cutoff for its charity care policy but only recently became qualified due to recent updates or did not seek out the support on their own.

Apparently, hospitals have found a more profitable solution than selling debt for pennies on the dollar. The more profitable method is forcing patients to sign agreements and partner with lenders that hound patients until the cows come home.

As Americans are overwhelmed with medical bills, patient financing is now a multibillion-dollar business, with private equity and big banks lined up to cash in when patients and their families can’t pay for care. By one estimate from research firm IBISWorld, profit margins top 29% in the patient financing industry, seven times what is considered a solid hospital margin.

In the midterm election an initiative was on the ballot in Arizona to cap the interest rates that could be charged on medical debts. It easily passed.

More than one in four Arizonans have medical debt in collections, and voters appear have approved a reprieve for them

With 75% in support of Proposition 209 and just 24% opposed, the Associated Press called the race. The measure, known as the Predatory Debt Collection Act, aims to restructure how medical debt is collected in favor of the indebted party by cutting down on yearly interest rates and increasing the amount of assets protected from creditors.

When I first heard about Proposition 209 I wondered what possessed enough people to sign a petition on medical debt. I guess it’s all in the name, The Predatory Debt Collections Act. Maybe the other 49 states need something similar.

Prop. 209 would reduce the maximum interest rates that could be collected from 10% to 3% annually. Currently, up to 25% of wages can be garnished by creditors, but Prop. 209 would limit that to just 10%. Courts would also be allowed to reduce the amounts being garnished in cases of extreme economic hardship, a power they don’t currently have.

Assets like homes, household furnishings, vehicles and bank accounts would be further shored up against collection or forced sale starting in 2024. The value of a home protected from creditors would be increased from $250,000 to $400,000, while the money in bank accounts safeguarded against seizure would be $5,000 — a dramatic increase from the current $300.

4 thoughts on “Banks and Finance Cos. are Now Collecting Medical Debts (with Interest)”