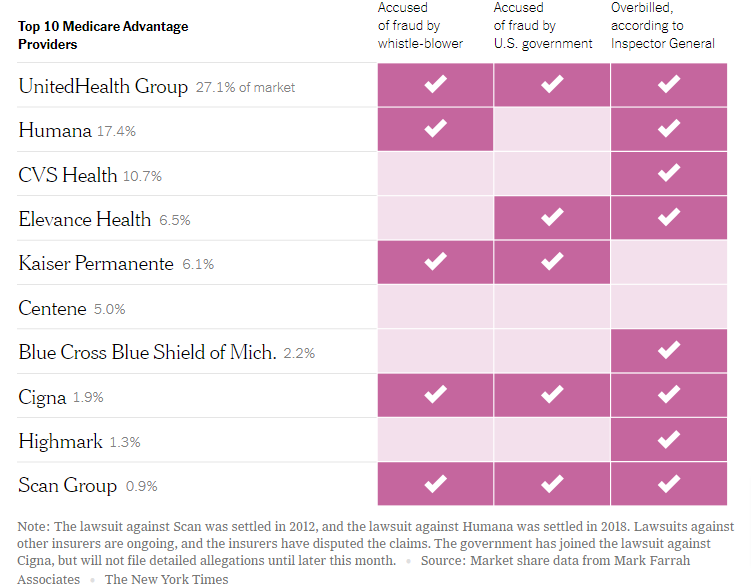 New York Times reporters Reed Abelson and Margot Sanger-Katz have managed to set a high bar (even for the Grey Lady) for those who aspire to mislead readers on health economics. They manage (1) to assert that most major Medicare Advantage insurers have been sued for fraud; (2) to warn how bad that will be in the future as more seniors enroll in these plans; without (3) ever mentioning that there is even more fraud in regular Medicare – the alternative to MA plans.

Fraud in regular Medicare is estimated to be as high as 10 percent of spending and similar estimates have been made for Medicaid. This type of fraud is real fraud, by the way. It consists of actions by doctors, vendors and hospital executives who end up in prison, if caught. Yet even after CBS sent 60 Minutes cameras to Florida to document how pervasive it is — for the entire nation to see – Medicare bureaucrats seem incredibly slow to do much about it.

In the Medicare Advantage market, this type of fraud would mean bad actors stealing money from private insurers instead of Medicare. And it probably happens very rarely. Credit card companies lose less than 1/10th of 1 % of transactions to fraud.

What the NYT reporters mean by “fraud” in Medicare Advantage is something different. It has to do with how the health condition of patients is recorded.

MA plans get risk adjusted premium payments that reflect the expected cost of treatment. In general, the sicker the patient, the higher the premium. So, in contrast to regular Medicare, MA doctors have an economic incentive to record every medical impairment – including conditions that traditional Medicare doctors might overlook.

As I have written before, for any given bloc of patients, the recorded conditions will be somewhat worse (and the payments to MA plans will therefore be somewhat higher) than they would be if those same patient conditions were recorded by traditional Medicare doctors. For some analysts, these extra payments are referred to as “overpayments.”

But that doesn’t mean the recorded patient conditions are wrong, or that their recording constitutes fraud. And it certainly doesn’t mean that we would be better off if all seniors were moved back to traditional Medicare.

2 thoughts on “Another Hit Job on MA Plans”